Cold Thermogenesis and the Epi-paleo Rx meet the Olympics

Cold Thermogenesis and the Epi-paleo Rx meet the Olympics

Jack’s thoughts:  It gives me great pleasure to bring you a story I have sat on for the better part of 6 months.  What this young lady fought through to get to the pinnacle of sport is a testament to her discipline.  Most people her age would be watching video games, eating fast food and be wondering “what if“.  After reading her words for months,  it was not “what if” for her, instead it was, if only I could reach deeper.   We all can learn something from Georgia.  All of us could reach deep within us, to find what this young woman has uncovered. In my view, “if only” are the two saddest words in the world.  Georgia rose above conventional advice, and did something very few humans could do. Never mind that she was a 17 year old with an Olympic berth on the line and having a broken spine.  She did not settle for mediocre, she went for her dream.  She reached for something special in herself,  in the face of defeat.  We all may encounter many defeats in life, but we must not be defeated by any foe. In fact, it may be necessary to encounter the defeats, so we can know who we are, what you can rise from, how you can still come out of it.  Georgia’s story is just awesome.  At Paleo Fx, I mentioned her plight but could not let the cat out of the bag.  Anyone who could sustain a broken spine and come back from it, and make her countries’ Olympic team, is the story of something special.  How she did it may shock some of you.  She use CT and the Epi-paleo Rx before it was live.  She accomplished this in a few short months.  She, and her Mom sent me numerous emails about her trials and tribulations and all I did was offer encouragement.  I was very proud of her via my computer.  She accomplished what few could only imagine.  What she did with that was nothing short of amazing to me.  Her mental and  physical fortitude, and resolve, emboldened my own spirt thousands of miles away.  I love people who can smile when they face trouble or adversity.  Georgia’s story is a story of passion and perserverence against all odds. She reminds us all, if the road is easy, you’re likely going the wrong way.  I am very pleased to allow her to share her Olympic story with you all. 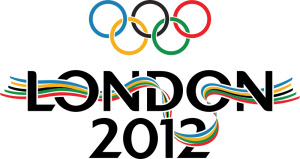 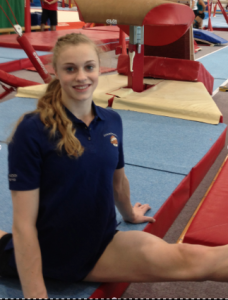 My name is Georgia-Rose. I am 17 yrs old, number three of six children and an Olympic and Worlds Gymnast representing Australia. I come from a rather diverse family (or odd to my friends) spanning two generations. My grandparents were 1960s parents and very free-spirited, hence my mama and my uncles are somewhat different from my friends’ parents.

My Nan started up the first nudist club in our region and of course, my Pop joined in. My pop was a kosher butcher (but not because we were Jewish but because we could then have a license to kill our own livestock for all of my pop’s butcher shops). I am telling you this because I spent many holidays and weekends on the farm with my grandparents; we have always had grass-fed meat and home-grown vegetables in season.

Both of my parents are chiropractors and my godfather is a chiropractor. My oldest brother is studying medicine, my aunt is a home birth obstetrician and my uncle is a neurosurgeon (deceased). So you see, I have had incredible exposure my whole life to a lifestyle that is as natural as possible. And to cap that off, I have been training as a gymnast since I was five years old. 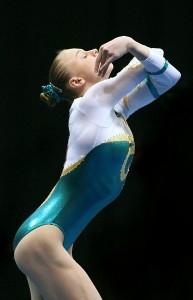 For most of my time as a gymnast, I have eaten very well (paleo since I was 15) and have been reasonably injury free in comparison to my fellow gymnasts until I hit Worlds and Olympic-trial time. I think the intense training along with the added emotional stress of, Am I going to make it on the team? resulted in injuries that I had never seen before. I was starting to experience intense pain in my lumbothoracic region along with an avulsion fracture of T12 (spine fracture). The pain was unbearable and of course, the sensible thing would’ve been to STOP training–but try telling that to me, an obsessed 16-yr-old who has trained since she was 5 to make the World’s team! My mama was adamant that I not take pain-killing medication, as she was very concerned that I would mask all symptoms and cause more harm to an already-injured spine. I could not move. I could not bend forward, sideways, nor backward. The sports doc would not clear me for competition; I was devastated. This was when my mama told me to read Dr Kruse’s blog. She was already using a lot of his work with her patients and she was adamant that this was going to be the only thing to help me.

Well, I can tell you I’m very compliant (when it comes to my success) and I will do anything to stay in gymnastics, BUT … sitting in ice cold water twice a day, ARGH ARGH! This was a bit much. I have a very low body-fat percentage and I get cold very quickly, but I would do anything to stay in training and to stay competitive, so this is when I started to become a Kruse Gymnast. 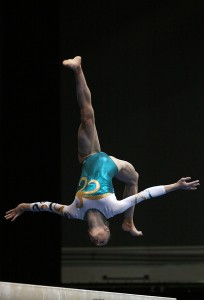 I didn’t start slowly with CT; I didn’t have time. I just plunged straight in 20-40mins, twice a day. I was skeptical to say the least and really didn’t think this would work; however, within 24 hours, my pain was decreased by 70% and within three days, I was back doing full training. I still had some pain while training and was keen to stay off the anti-inflammatory and pain killing medication so I kept up with the twice-daily CT (all my fellow gymnasts thought I was crazy). My pain was getting better but not gone.  It was at this time that we had our skin folds checked and after four weeks of solid CT, my skin folds had dropped down two points (loss of 3% body fat). I was eating the same as always and training the same hours; CT was the only difference. Trials came around for Worlds and I was on the team. We competed well and our team qualified Australia for a berth at the 2012 Olympics. I thought I was safe now and backed off the CT.

The next eureka moment for me was at a family dinner. We were discussing diet and I confessed that I was always hungry on paleo (I wasn’t under-eating, by the way). My eldest brother (he was the one who found Dr. K’s blog and has been an avid follower for nearly two years) said eat more fat and more seafood. So hence, the beginning of my bullet-proof coffee mornings and my change in diet from meat to seafood. We had a three-week training camp starting the following week where all food is monitored and supplied (mainly low-fat, carb meals). I took my own cans of red Salmon and butter for my coffee. It was during this time that I ate more fat than I’ve ever eaten in my life and more than all of the girls at the camp put together. They were horrified until I had my skinfolds done and again they were down another 2 points (so much for calories-in verses calories-out; I was consuming more calories than ever before). 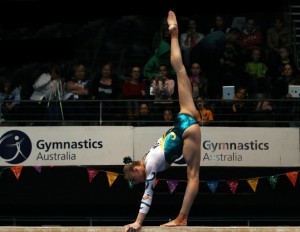 The nutritionist was sent to ask me if I was vegetarian. “Of course not,” I told her. “My Pop is a butcher and I hold the record for the chicken who can run around the longest without its head on. And I helped pluck, cook and eat it! Vegetarian I am not!”

It was at this time that my residual back pain started to disappear. I was, for the first time in close to a year, training without pain. SO, go figure: I’m taking ice baths for at least 30 mins once a day, eating large slabs of butter and huge amounts of fish, prawns, oysters and bacon everyday. My pain has gone and I have the lowest skin folds on the team.

SO ALL IS GOING WELL UNTIL three days before the first Olympic trial, and I injure my back again during training. I have never been in so much pain in my life! I can’t move and I am screaming in agony. I am rushed to emergency for an x-ray and I am flipping out. The radiologist is not happy; he says I have re-injured the area with an avulsion fracture and wants more tests done the following day.  He sends me home to bed rest where I plunge myself in to a bath full of ice and water for 40 mins. When I get out, I cannot stop shivering but I am starting to move a little better. I slowly warm up and then get back into another ice bath for 30 mins. I am freezing and look ridiculous with beanie gloves and sock mittens on, but so so worth it. By the time I crawl into bed, my pain has decreased by 50% and I am able to move much better. 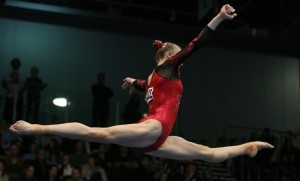 I am supposed to travel to the Olympic trials the next morning, so I set my alarm for 4:30 am to once again get in another ice bath. By the time I get on the plane, my pain has decreased by 70%. It took another two days with limited training and twice-daily 30-minute ice baths.  By the third day and the start of trials, I was up competing without painkillers. The sports doctor could not believe this.  He told me the radiologist misdiagnosed the fracture, as there is no way I should be competing if the radiologist had been correct. I know it was the CT along with my change of diet; I have never recovered this fast.

I competed well–not my best, but good enough to get me to trial two. I still had times where my back was painful, but this happened if I was slack with the CT or if I had not eaten enough fat. I find when my fat consumption is low, my pain increases. It went well at trial two (apart from a disastrous beam performance on day two) and I came in first all-around. I was named on the Olympic team for Australia 2012. 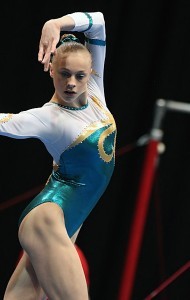 I have since come back from London and am training for another competition in Acapulco in October. (I really should have taken a break, but who doesn’t want to go to Acapulco?!) I continue to do CT once-to-twice daily and always start the day with a decent slab of butter. (It is hard to do morning training on a full stomach!) I never get hungry and am always full of energy at training. I eat more seafood than meat. My dad cooked crocodile [Jack is including a crocodile recipe in the fall cookbook update] and mushrooms on Friday – not sure if this is quite seafood, my little brother said it’s Epi-seafood. I eat everything my friends don’t and nothing they do. They all think I’m crazy, but always tell me how amazing I look.

Dr. K, I appreciate everything you have done for me so much. You are AMAZING! I know without your work, I would not be a competitive gymnast; I would be a retired gymnast. Perhaps the most amazing thing about my story is that I was paleo and I had always eaten organic, with grass fed meat–but as soon as I started following your work, my life as a gymnast soared. Thank you!