Simple Steps to Reduce EMF Exposure in Your Home or Office

Simple Steps to Reduce EMF Exposure in Your Home or Office

Since Dr. Kruse started talking about EMF in the EMF blog series earlier this year, like many of you, I began wondering how my professional life, specifically my workspace, was impacting my health. As a business owner, being in front of my Macbook or staying connected via my iPhone and iPad is part of my job. I constantly have my hands on a keyboard or am on a conference call with my team or clients. Technology and staying connected are a must.

As Dr. Kruse explained, exposure to EMF can interfere with our body’s ability to regulate cellular timing by syncing with the earth’s magnetic field, thus posing a significant roadblock to reaching optimal. I started researching and was overwhelmed at the amount of information out there related to reducing EMF. There was also a ton of information on grounding, including many conflicting ideas on “how to do it best.”

The sheer glut of information is what inspired me to seek out the help of Michael Neuert to create the EMF Bootcamp for our community. Here are a few steps I took to limit my exposure to EMF:

Turn off wifi at night

While I was researching all of my options, I knew I wouldn’t be able to implement everything at once, so I started with unplugging my cable modem before I went to bed. This gives your parasympathetic nervous system a break and space to sync up to the Earth’s magnetic field. Nighttime is the most crucial time to eliminate EMFs because they interfere with the core goals of the parasympathetic nervous system during sleep: restore, rejuvenate, detoxify.

I also unplugged my printer (almost all printers emit a wifi signal) and anything else that wasn’t necessary overnight. I have most of my devices plugged into one power strip, so turning them off was as easy as flipping a switch.

I knew I had to figure out how to get rid of my wifi signal, but there was no way I could work without Internet. So first, I ordered some ethernet cable and hard-wired my computer to my cable modem so that I could turn off wifi during the day. I’d only turn wifi on if we needed Internet somewhere else in the house (eg. to watch Hulu). I’d heard about cable converter boxes that would give you an ethernet port wherever you have a coaxial cable outlet in the house (provided you’re using cable for your Internet service, of course). My research led me to ActionTec box sets. You have to buy at least two of these converters for the concept to work (there’s something about the feedback loop that requires at least two boxes in your configuration), one plugging in at your cable modem, the other one connected to other coaxial outlets elsewhere in the house.  But after that, you can add a third, fourth, or fifth box wherever needed.

This was a game-changer and enabled me to completely disconnect wifi in my home. So many devices need Internet, from Apple TVs (or NeoTV/Roku) to smart TVs and of course, tablets and phones. By setting up these cable boxes in each room, I was able to transition to a completely wifi-free home.

A few notes about this transition:

I don’t use my iPad or iPhone in my home anymore to connect to the Internet. Instead, these are convenient for when I’m out and about and want to connect at a coffee shop or a friend’s house.  I can still turn on the wifi when it’s needed at home, which is very rarely (maybe once per month). I even have an extra ethernet cable in my office for when my team members or clients stop by so they can wire in without me having to turn on the wifi signal.

In my opinion (and experience), there is no way you can properly reduce your exposure to magnetic fields without testing.  I rented several EMF testing meters from Michael Neuert so I could measure exactly how much EMF was in my home after I had taken the above steps. I was fortunate that my electrical fields were pretty low in general, but magnetic fields from bluetooth and wifi signals were still through the roof!

First, I had to turn off the wifi signal coming from my Airport (Mac’s wireless router), which required a phone call to Apple. (I’d deleted the network configuration on the Airport, but the device was still transmitting a signal.) Of course, Apple resisted helping me and told me numerous times that Airport was not meant to function without wifi. I persisted and they finally walked me through the process.

I expected that since I’d shut down the Aiport and turned off the printers, that the fields would be pretty low in my office. WRONG. I was surprised to learn that EMF was coming from many other sources besides my wireless router.

My Macbook was emitting a signal to detect wifi in the area; I had to disable that. I also detected signals coming from my awesome wireless trackpad, a bluetooth speaker across the room, and of course, my cordless phone. So, I ordered a wired mouse, turned off the bluetooth speaker and replaced my cordless phone with a corded one (I ordered about 20 feet of white phone line so I could have the phone in close proximity to my desk; I secured this cord around the baseboards of my office to keep it discreet).

I was surprised that we kept finding signals emanating from things, even after I turned off wifi and disabled the signal inside my computer. If you have a home office (or several gadgets in your house), you really must at least rent a meter and test for yourself. After using all the meters from Michael and extensively testing my house, the one meter I felt like I had to buy was the one that measured magnetic fields so I could keep tabs on those pesky bluetooth/wifi signals. (It’s pretty easy for things to get turned back on without you realizing it! And God knows what new thing is coming into your house that emits a signal …) 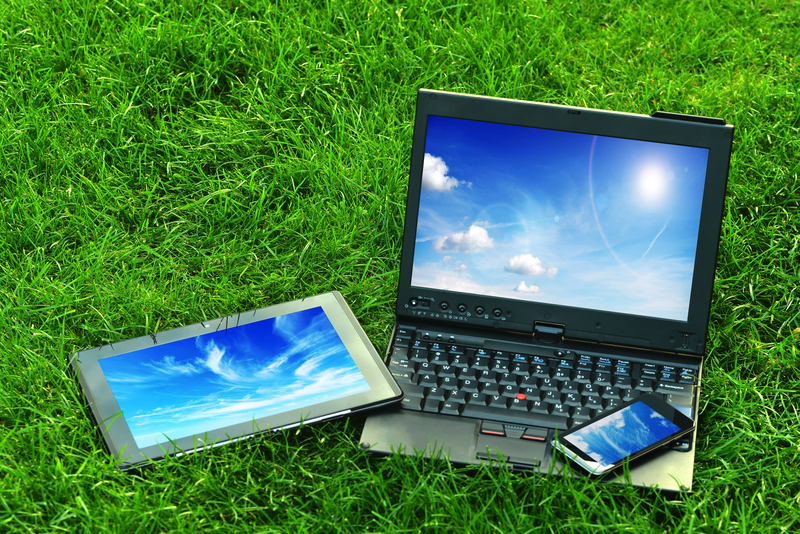 Laptops emit the most powerful EMFs, and we work right on top of those fields. (In fact, I’ve had so much electricity running through me while one hand was touching my laptop that a friend could feel the electricity by touching the skin on my other hand!) For the EMF Bootcamp, Michael Neuert did a video tutorial on how to ground computers by attaching the metal end of a USB cord to a grounding cord. This sends EMFs into the electrical system’s grounding mechanism rather than emitting the EMFs into your environment. Because I’m not keen on do-it-yourself if I can buy it reasonably, I purchased a grounding cord for my Macbook that was less than ten bucks and works just great.

Check out the video on how to ground your computer in just a few minutes!

Even after grounding your computer, it will still emit some EMFs, so I took some extra steps.  I set up a docking station for my laptop, bought an external display with mic, camera and speakers, then used an external, corded keyboard and mouse to do my work. This way, I was further away from the intense EMF signals the setup was ergonomically better to boot!

Other quick tips to reduce EMF

A word about cell phones

Cell phones deserve their own blog post, as there’s a lot to consider.  A big takeaway from the EMF Bootcamp for me was to use my cell phone on speaker instead of putting the device up to my head. If you must use a hands-free device, there are a lot of options out there for choosing lower-risk ear buds.  In general, using corded ear buds is typically preferred over bluetooth devices.

Hope you find these tips useful in creating a work environment that is conducive to both your productivity and health!