Looking back on that decision, it was a life-saving choice, but not for the reason of exercise. That decision removed me from the gym at night because I started walking and jogging 2 to 4 hours each morning. After doing this for months, I had lost a bunch of weight again, rebuilt my pneumonia-scarred lungs and somehow regained my energy levels back. After finishing the marathon with severe leg-cramps and extreme dehydration, I realized I pushed my body too hard. I also developed a strange hip issue in the course of training…the same side I pocketed my cell phone.
In my unknown stupidity, I went back to the gym in the evenings. But I had an advantage… the life experiences didn’t take me long realize how good I felt getting outside in the morning compared to how bad it felt going to the gym at night. I canceled my gym membership from that point forward and just took it easy outside from that time onward, even with my hip problem. About a year later, the hip issue cleared up also.
I look back to my past failures and compare them with the quantum goodness I have acquired in the past few years as a Dr. Kruse member. Without those health threats and outright failures, I am certain I would just be another Joe believing in the conventional, popping supplements, watching the tube until 1am every night, outright blocking the morning sunlight with sunglasses and clothing while fearing the burn of UVB rays by slapping on toxic sunscreens daily to omit them entirely.
When I pursued deeper knowledge of the mitochondria, the Electromagnetic Spectrum, Wallace’s mitochondrial works, Pollack’s 4th Phase of Water and the list continues, I knew the environments we put ourselves in can be either a medicine to keep us in balance or a slow-moving poison to drive us off a crumbling cliff. [As a side-note, knowing Pollack himself was just 10 miles away from me in downtown Seattle, I got his autograph foreshadowing the day he takes hom the Nobel Prize]. 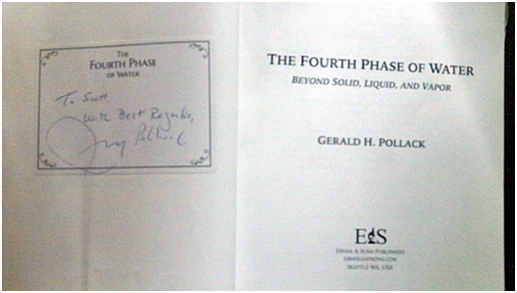 In retrospect, it is easier to identify how environments mattered; they were everything for my health and the health of the people I observed. Could the times we got outside and allowed the sun to strike our bodies on a continual basis be the largest player? Embracing the sun was the way of things just 100 years ago and throughout human history previous to the light bult. And aside from sunlight, humans were touching and working the earth with hand and foot. Did I find I often came down with massive problems in the winter when there was no sunlight available? Oh yeah. Did I find that I got most of my benefits in a sunlit summer of 18 hours rather than a dark winter season? Yes! Therefore, could I find an environment that provided sunlight benefits all-year around to power my health? I did! I moved my family into a higher altitude climate that could produce Vitamin D from sunlight in the dead of winter:

Local and micro-environmental changes also made a huge difference in my health, like pushing my monitor back 9-inches made a noticeable difference to my health! The analogy goes something like this. I often visualize myself in a fishbowl ranging from a toxic poison to a life-giving potion, stuck in the environments I choose or those forced upon me. At many points in my life, I was a strong fish living in a dirty fish bowl. But at other times, I was a sick fish that put myself in good water. So I have to ask myself, which fish lives longer? The athletic one in the dirty fish bowl or the average fish in a clean fishbowl? Identifying and understanding where the damage comes from is a primary key to unlock the location of the poison flask. It’s quite important to understand the frequency of poison exposure and its intensity, once a poison is known. It is also important to hammer this point: omitting a life-giving potion, like sunlight or grounding to the earth, for longer periods of time can promote a greater poison creation
It is for these reasons, I define “environments in all of their manifestations” as important for human health. My local world includes the broad strokes of environmental considerations down to the micro ones. I consider the atmosphere above, my location on the planet, water sources, the town or city I choose to live in as very major players to my health. But digging down more, I discovered a whole host of issues with my local and micro-environments… home, work, school, shopping malls and even my car. From my measurements last year that you can read about in my Journal, you’ll discover I ditched a very pricy vehicle for and older one and invested a ton of money into my second-set of eyes: my scientific meters with UV light and nnEMF. In part, this is why I started looking beyond Seattle for opportunities in a better quantum environment.
During my first year as a Kruse member, I trained myself in the use of electromagnetic detectors to quantify the hidden and artificial EMFs most people interact with daily without realizing. Even though I went through a lot struggle to ‘mitohack’ my Seattle home and on a mission to cleanup my son’s micro-environments because he exhibited many signs of EHS (Electro Hypersensitivity Syndrome), I still didn’t have good access to UVB light. The reality of the cloud-covered Seattle skies made it as-clear-as-day that I was Lightless in Seattle. And with 5G on the horizon, sooner or later I might become sleepless as well. Don’t get me wrong, Seattle has benefits,…you just have to know where to find the beauty hidden among the noise. But could I use these benefits on a daily basis? No. 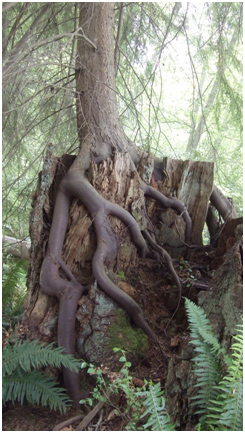 It turns out, the Pacific Northwest has the worst percentage of sunny days per year: Seattle takes 1st Place in the continental USA for the least number of sun-days and Portland, Oregon is #2. My EMF meters also told me cell towers going up everywhere. Knowing 5G was on its way and the family wanting more sun, I started looking for opportunities over a year ago. It took time, but I found a perfect career fit in Bend, Oregon, so I researched the region. Upon closer investigation of Bend, it sits at a higher altitude around 3,500 feet against about 10 mountains on the east side of the Cascades with ancient formations, a fluoride-free watershed, lower population density and access to the nearby mountains at 7,000 to 10,000 feet within a few minutes. More quantum kickers: the area is a high-desert pine forest (tons of O2), has snow on the ground about half of the year and gets some of the highest amounts of sun-days per year in the country.
Next on my plate was finding a home with a great advantage for my micro-environments. Because I wanted more access to sunlight and inside of the home if possible, I looked for homes with lots of skylights and windows, but also far enough away from the general population for a baselined RF EMF measurement. That required at least a half-acre of land to gain distance away from other homes with routers and other tech gadgets. I also looked at the home’s design and specifics such as where the circuit breaker box was located, what rooms could be shutdown with power while leaving other rooms on if needed, proximity to streets and how busy the streets might be, and so forth. I came armed with my meters and let my real estate agent know my issues.
Out of the eight homes I toured, five had the latest high intensity RF smart meters that max’ed out my Cornet at close proximity. Most homes were also tucked into tight neighborhoods on less than 0.2 acres of land. I labeled them all as no good. Two more homes were on more land, but I found had some major problems. One had a power transformer less 20 feet away where magnetic fields from could be detected inside. Another home had really bad lighting into the home and trees that blocked sunlight throughout the entire property.
But I was in-luck more than I knew with the last home. It was far more costly due to its remote location near the river on 0.7 acres, but it was built in the 1960s and every room was on the 1st floor. It still had the original glass throughout, including vertical skylight panels in every room and giant floor to ceiling windows to let light in everywhere. The glass had thinned out over the decades, and upon taking measurements around lunch time, I was getting UVB 2 inside. 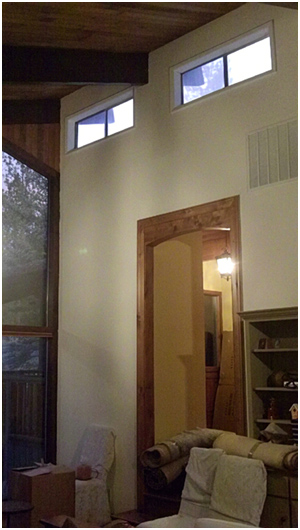 But it gets even better. The main living room was built with huge floor to ceiling lava walls for grounding indoors. 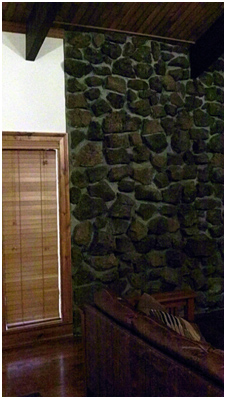 Strangely enough, the previous home-owners had been feeding deer using a 100 gallon water trough that is now my outdoor CT tub. 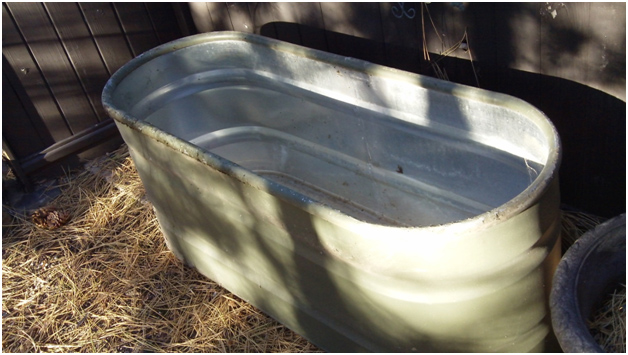 I thought about all I had learned over the past two years and focus it on the environments we allow into our lives. It spawned the concept of a ‘Quantum Quiz’ aimed at people with less knowledge about the interactions of sunlight, water, magnetism and nnEMFs. I crafted the quiz to be educational with each question designed with a purpose in-mind. Here is the test if the reader wishes to take it. Part 1 and 2 are a series of questions for answering Yes or No. Part 3 is the Results Section to receive your grade. I also took some time to provide a list of some of the major diseases that are linked to the mitochondrial dysfunction. 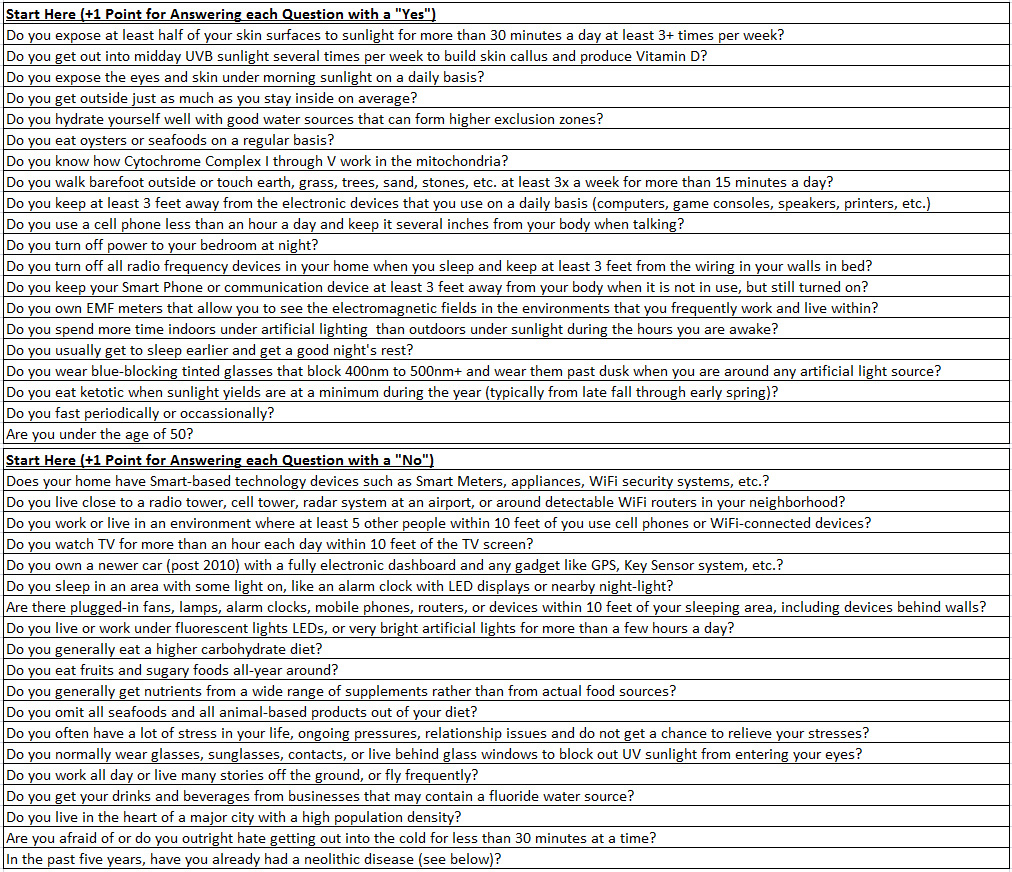 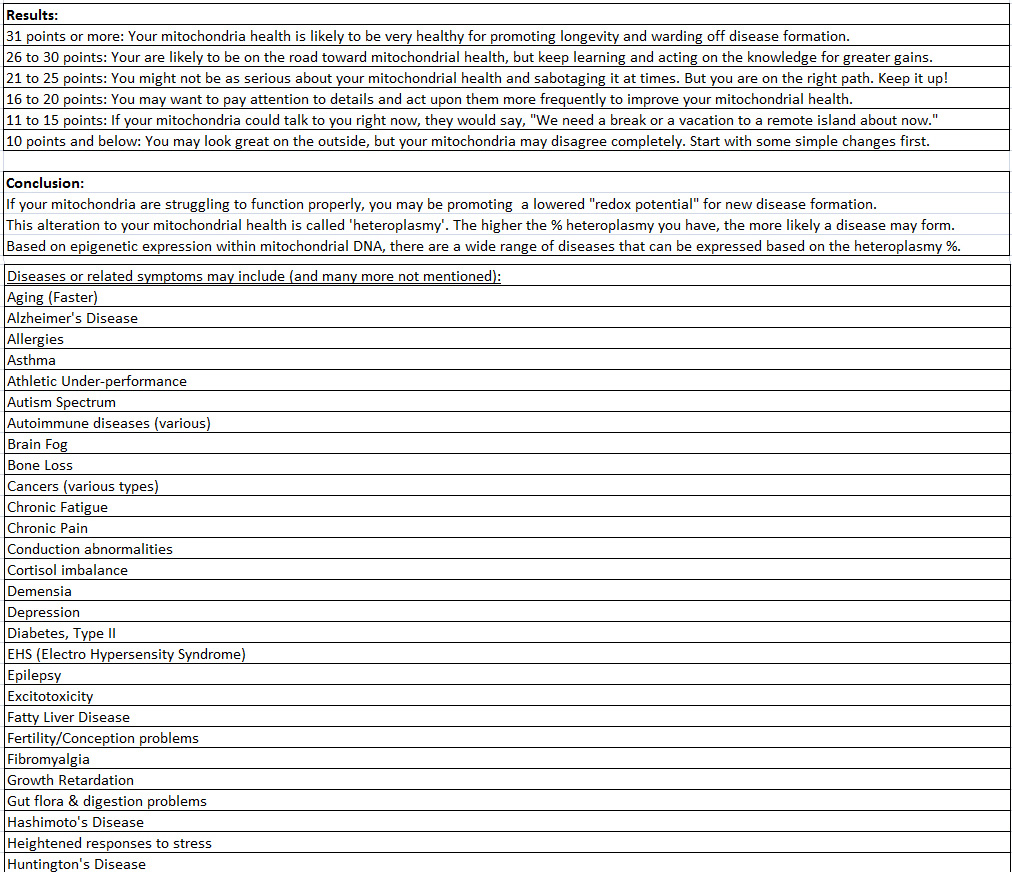 Keep in mind that I designed the Quiz as a stepping stone to dig deeper and question my questions that I pose to you.
As I finish up this blog, one thing has become crystal clear during my move into a better quantum environment. We have choices available, but we also must take action and risk to receive rewards and benefits. The first environment choice I had to ask myself was, “What type of environment am I setting up for my own body?!” I see society fixated with sunglasses and clothing themselves against the basic forces that drive and benefit our health. In just a few decades, the narrative of “sunlight is a healer” changed to “sunlight is dangerous so therefore omit it all.”
Seattle works well for those that either fear UV light or those that wish to crash their Vitamin D status. Coffee sells, huh? I could have kept up the bandages by flying the family to tropical or higher altitude locations continually to revitalize them, or I would have to bite the bullet and take a risk. I could have looked at the move as a stressful-one. Instead, I rolled with the punches, took each step at a time and ran the marathon. Is your cup half-empty or half-full? It’s true that technology’s intersection with our biology is shaping up to be our greatest hurdle to complicate our health as we move into the future. There are many elements we can control in our local and micro-environments. But if you lack a great lack of control where you live, it may require you to change your location to find a more optimal fishbowl.

CITES:  What we advise you use to test your environment with some of these devices:

Or you could hire an nnEMF engineer yourself.